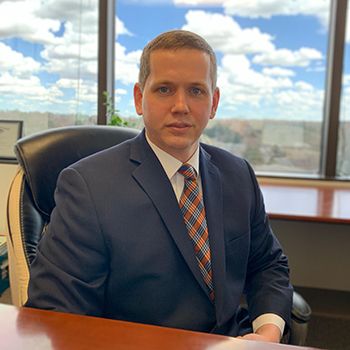 Lain Aaron Lawrence is the owner and attorney for the Lawrence Law Firm. He is originally from Russellville, Arkansas, and he moved to Colorado after graduating from the University of Arkansas. He obtained an undergraduate degree from Arkansas Tech University.

His move to Colorado was spurred by his love for the mountains. In his free time, he enjoys skiing, the Rapids, and the Broncos. On the weekend, he enjoys spending as much time with his family as possible. While he doesn't like to admit it, he also enjoys video games and comics.

Mr. Lawrence was admitted to practice law in Colorado in 2010. The first years of his career were spent working at a plaintiff’s personal injury law firm. While working at that firm, Mr. Lawrence handled multiple cases from conception to jury trial. He gained experience as a dui attorney and car accident attorney.

Mr. Lawrence spent several years working at a big personal injury firm. In this time period, he took several cases to trial. He also worked on several appellate matters, including taking one case to the Colorado Supreme Court.

He didn't hate the experience at the big firm, but he did not like the big law firm. He left to start his own practice in 2012. As a self-employed attorney, he enjoys the ability to see clients as clients. He enjoys a hands-on approach to the practice of law at the Lawrence Law Firm.

The firm focuses on their client’s individual matters. This means tailoring representation to the individual client's case. The needs of one case is not the same as the needs for every case. Mr. Lawrence wants to get the outcome the client wants.

Mr. Lawrence is a member of the Colorado Bar Association, Aurora Bar Association and Colorado Criminal Defense Bar. He is active in most courts throughout the Denver Metro area, including Denver, Colorado, and the Adams, Arapahoe, Jefferson, and Douglas counties.

If you or a loved one have any questions concerning a legal matter, do not hesitate to contact the Lawrence Law Firm office. Our criminal defense and personal injury attorney would be glad to set up an appointment and discuss your case at length, while explaining every step of the way.

Every consultation is free, and we want to have no obligation meetings. You can also see Mr. Lawrence’s professional profile at Linkedin.

No two cases are the same. When you work with me, you'll get personalized representation as I seek your justice.